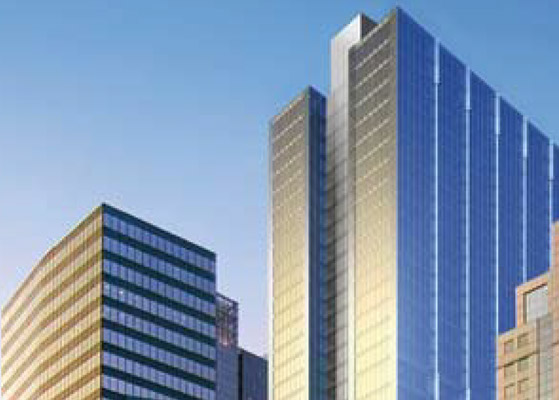 To increase its real estate portfolio, while achieving the energy and cost savings available with today’s technology.

In addition to providing a complete design/build core-and-shell project, Gibson provided systems that will reduce energy costs, helping the facility to qualify for LEED-CS silver or higher certification.

Gibson’s contribution to the facility’s energy efficiency started with the lighting system. Lobby lighting and exterior arcade lighting both use low-energy LED (light emitting diode) fixtures. Throughout the rest of the building, which contains no incandescent lighting, the company chose either fluorescent or HID (high-intensity discharge) fixtures. In addition, a building-wide lighting control system monitors non-tenant areas, such as public corridors and restrooms, and turns the lights off when the areas are unoccupied.

Beyond the lighting system, the company provided further energy-saving capabilities. For optimum monitoring by tenants and owners alike, the company installed technology that measures and verifies electrical consumption on each floor. This allows goals in reduction to be set and easily monitored. Another strategy employed by the Gibson team was to install variable frequency drives on all water and airflow system motors. Rather than running at 100 percent and regulating flow with less efficient dampers or valves, this design permits control of mechanical air/liquid flow by reducing or increasing power in response to fluctuating usage requirements, thus saving energy.

Gibson’s involvement in this project began early with a review of the owner’s building criteria and creation of a preliminary design. The company then prepared all initial construction documents and managed them through the permitting process.

To complete its core-and-shell work, Gibson brought service into the building’s mainline utility vault 2 levels underground. Electrical distribution was then routed up through the building along with the emergency power, fire alarm, voice/data, rescue assistance and stairwell locking systems. All systems were designed to fit into the tight constraints of the building core resulting in an optimal amount of rentable square footage for the owner.

155 North Wacker was developed by the John Buck Company as a joint venture with JBC Funds, Morgan Stanley and Brijus Properties. Designed by Goettsch Partners, the 48-story, floor-to-ceiling glass skyscraper consists of over 1.1 million rentable square feet of space.